From 18 August to 2 September 2018, Indonesia hosted the prestigious 2018 Asian Games in Jakarta and Palembang. People came from all around Asia to support their countries, celebrate the athletes and the matches, and praise the luxurious Opening and Closing Ceremony of the Games. Government officials believe the Asian Games was a big success in framing the national image, but is it really a big success for the progressive development of the nation?

The article argues that there are many implications of holding this mega event in Indonesia; in the field of human rights, environment, and urban development. While this article agrees that all implications raise huge concerns for the nation, it will mostly talk about the human rights violation and environment, as they are the most pressing issues related to the Games that have not been discussed enough. Furthermore, the article was written with the purpose of raising awareness and in the eventuality that there will be more data available to the public, a follow up article will be written.

According to Amnesty International, excessive use of force by the police has led to a high number of deaths of suspected criminals in several cities close to the venues of the 2018 Asian Games. It was found that police forces in Jakarta, South Sumatra, and Lampung shot dead at least 15 criminal suspects and injured 41 others (Amnesty International, 2018). This was a result of direction from high-ranking police officials to their personnel in combating crimes to ensure public safety during the Games (Lamb, 2018).

This incident could be interpreted as a lack of reflection from high-ranking officials about human rights. When hosting an event of this size, improving the national security is a priority, however, a nation should respect and protect human rights at all times. This trend is raising concerns because once the license to shoot and kill is normalised within the police institution, it could be used for other crimes in the future. As a ratifying country to the International Covenant on Civil and Political Rights, Indonesia is obliged to protect Article 6, related to the use of force and firearms and the right to life. Furthermore, it is also subject to strict international and national standards on the use of force and firearms such as the UN Code of Conduct for Law Enforcement Officials (1979), the UN Basic Principles on the Use of Force and Firearms by Law Enforcement Officials (1990), and the Indonesian Chief of Police Regulation on the Use of Force in Police Action (No. 1/2009) (Amnesty International, 2018).

When confronted about the incident, the police chief Tito Karniawan reaffirmed that it is completely justified to shoot people if they fight the officers during the arrest (Lamb, 2018). Responding to this, the National Commission of Human Rights gave a statement that they are ready to assist the family of victims in cooperation with the Legal Aid Institution (Prabowo, 2018). Amnesty International (2018) also called for independent and effective investigation to get the facts, while admitting that challenges such as the lack of transparency and accountability mechanisms continue to exist. It is important that the government follow up on this issue and for citizens to keep an eye on the issue given the alarming trend of unlawful killing that violates human rights.

The government has tried to make the image of the cities drastically better by making wide pavements (something rare in Jakarta), planting trees, and imposing an even-odd policy to reduce traffic in the months prior to the Games. These actions are debatable whether they create  benefits or not, but the most concerning government actions are those reducing air and river pollution.

In regards to air pollution, the levels reached a point described as unhealthy. The Environment and Forestry Ministry stated the aim of reducing pollution levels from 184 micrograms to 25 micrograms per cubic meter. But just days before the Games, Al Jazeera noted that the pollution level was still unhealthy, at 154 micrograms per cubic metre (Bayani, 2018). Even though organisation such as Clean Air Asia told the government how to reduce this pollution over a year ago, the government did not engage in any actions to change the situation. In clarifying this issue, the Meteorology, Climatology and Geophysics Agency denied the accusation and said, “Jakarta or Indonesia is not ranked as one of the countries that the WHO announced in the air pollution and health impacts report,” (Riyadi, 2018). This statement implies that WHO might have different ways of gathering the data, but does not explain what efforts government have taken in reducing the alarming level of pollution. 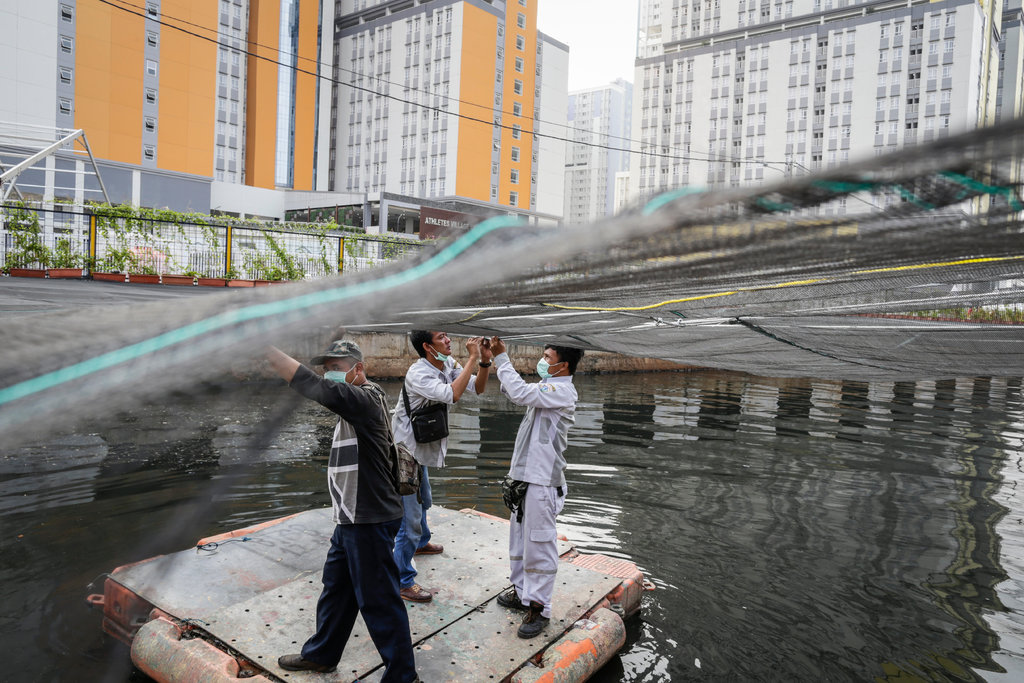 Another problem is the way the government hid the polluted river with a nylon cover to avoid the bad smell. The Black River (Kali Item in Indonesian) in North Jakarta was covered in a half-mile black nylon net a month before the event (Cochrane, 2018.) The Jakarta government spent Rp 580 million (US$40,002) for this project (““Black River” nylon net costs Rp 580 million”, 2018). According to their statement, they would continue to increase efforts to clean the river after the Games. Ideally, future efforts should be more sustainable and cost efficient, unlike the nylon cover, which was a short term and rather expensive option.

New and renovated buildings: what’s next?

After spending more than Rp 35.8 billion (US$ 2.4 million) and rushing to build and renovate sport centres (“12 Jakarta sport venues for Asian Games inaugurated”, 2018), it is important to think of how the government would plan to maintain the quality and usage of the buildings now. Repurposing, reusing, and even relocating buildings are common strategies used to ensure the life of buildings continue to matter (Balch, 2016). Senayan area, where most of these buildings are located, is a public place in Jakarta that has rare green open spaces. Thus, it becomes necessary to maintain this, however, there has been no clear direction form the government about the future utilisation of sport buildings in this area. Therefore, it is still too early to conclude on this point.

Finally, the answers to issues and questions raised in this article would be critical points to note by the Indonesian government who is currently bidding for Olympics 2032 (“2032 Olympics: Indonesia to bid for Games”, 2018). While 2032 seems far away and the bidding process takes a long time, the government has to reflect and evaluate on the implications of the 2018 Asian Games and how it affected its citizens.

Balch, O. (2016, September 1). What happens to Olympic venues after the closing ceremony? The Guardian. Retrieved from https://www.theguardian.com/sustainable-business/2016/sep/01/what-happens-to-olympic-venues-after-the-closing-ceremony