India and Pakistan have had a contentious relationship since their partition into two separate states in 1947. United as one colony under the British Empire, British India’s split along religious lines was accompanied by extreme violence and bloodshed, displacing over 14 million people and witnessing the deaths of up to 2 million more. This event, integral to the foundation of both nations, is long past but far from forgotten. Even today, more than 70 years after partition, tensions continue to run high.

Perhaps nowhere is this phenomenon more visible than in the realm of government. On Tuesday, March 13, 2018, Pakistan’s foreign office released a statement accusing “Indian state agencies” of harassing and intimidating its diplomats and their families posted in New Delhi. The note verbale released by the Pakistani government specified that this alleged harassment was not confined to one specific incident, but rather that it extended to a climate of bullying of staff and their families, noting that diplomatic staff’s children had been stopped and menaced on their way to school. In response, India promised to investigate the allegations, noting however that Indian diplomats had been victims of similar scenarios of “harassment and intimidation” in Islamabad.

If Pakistani diplomats are not being protected in India, and vice versa, it is likely the result of a conscious choice on behalf of the security and intelligence services, or on behalf of the government institutions sitting hierarchically above them. March 2018 comes amidst growing strains on Pakistani-Indian diplomatic relations. According to India, the most recent conflict began on March 12 when ISI officials raided a residential complex for Indian diplomats in Islamabad. As Aljazeera explains, “The South Asian neighbors, which have fought three wars since gaining independence from the British in 1947, regularly trade tit-for-tat allegations of harassment and espionage against diplomats.” It is clear, then, that the diplomatic services and intelligence services of both nations are being used as pawns in a simmering, yet contained, long-term spat.

Nevertheless, these allegations of harassment come at a moment of high tension for Pakistan and India. There have been numerous deaths at the Pakistan-India border in the disputed region of Kashmir in the last year, accompanied by violence on behalf of both sides. The Indian government has accused Pakistan of participating in the funding of attacks on its military posts in Indian-administered Kashmir, while some locals in the majority-Muslim region have become engaged in violent clashes with Indian military forces. The ongoing violence in Kashmir comes at the expense of the welfare of civilians, who lie in the direct path of the carnage. Tens of thousands of people, mostly civilians, have died in Kashmir since 1990, as casualties of manifestations of this geopolitical conflict.

As members of the armed forces, Indian security personnel in Indian-administered Kashmir hold special rights, due to the “Armed Forces Special Powers Act.” These include the right to arrest and hold people suspected of committing a crime without a warrant, the right to stop and search any person or vehicle, and the legal immunity of army officers, who may not be prosecuted while acting under this law. Some argue that this creates a culture of impunity and oppression, prohibiting Kashmiri citizens from exercising their human rights to “life and liberty,” as expressed in the United Nations’ 1948 Universal Declaration of Human Rights.

At first glance, the violence experienced by civilians in Kashmir may seem quite dissimilar to the harassment experienced by Pakistani and Indian diplomats in each other’s country. Upon further analysis, however, we can see that it makes sense to draw parallels between these two situations. Both Kashmiri civilians and Pakistani and Indian diplomats face the same reality of having their human rights disrespected, and at times both have likely feared for their lives. Moreover, diplomats, by definition, live in a foreign land and are dependent on a foreign government for their safety and security, a sentiment shared by many citizens in Indian-administered Kashmir.

However, it is important to recognize that, although India and Pakistan have been shown to disrespect the rights of the other country’s citizens, neither country maintains  a good human rights record within its own borders. According to Human Rights Watch, both Pakistan and India face numerous allegations of human rights abuses in the realms of counterterrorism and law enforcement, just as both fail to protect minority populations (e.g. religious minorities, women and girls) under many circumstances. Although they are two separate nations, Pakistan and India face similar problems and must be held accountable for their human rights records, both nationally and internationally.

Although partition remains, in many ways, a taboo subject, generations of young people removed from the violence of the past are growing up in a globalized world, rejecting yesterday’s conflicts in favor of interconnectedness. This wave of tolerance is counterbalanced by a spirit of religious fundamentalism and conservatism internationally that manifests itself equally in India and Pakistan. A microcosm of international relations, reflecting the tensions and similarities that shape our world, one can only guess what the future of India and Pakistan has in store. 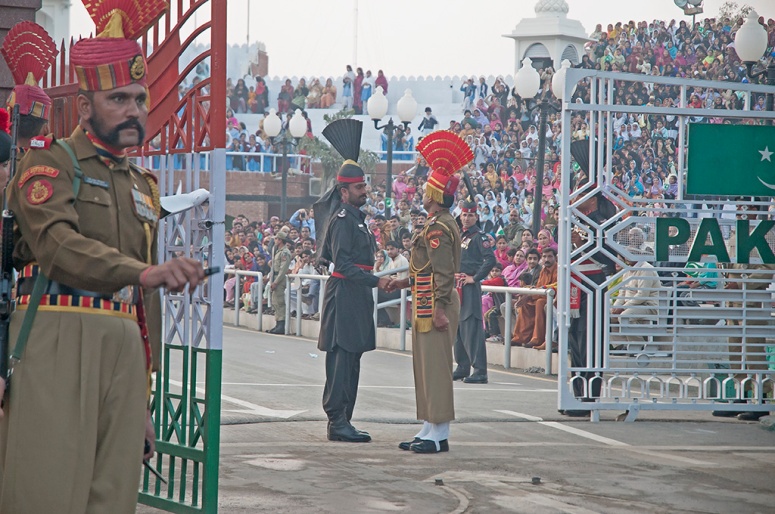 Every evening, the Indian Border Security Force and the Rangers of Pakistan perform a perfectly coordinated lowering of the flag and closing of the door ceremony at the Wagha border.

“(PDF) The Armed Forces (Jammu and Kashmir) Special Powers Act, 1990”Archived 1 October 2008 at the Wayback Machine. Indian Ministry of Law and Justice Published by the Authority of New Delhi