Universal access to affordable healthcare is a key pillar of the Sustainable Development Goals called for by the United Nations. Despite considerable progress over the years, still about half of the world’s population remains without access to adequate and affordable healthcare services. According to the 2017 Global Monitoring Report (GMR) jointly commissioned by the World Health Organization and the World Bank, a lack of affordability of these essential healthcare means that 800 million people must spend over 10% of their annual household budget on “out-of-pocket” health care expenditures. The drain that healthcare has on private incomes means that much of the global population must make sacrifices that can drive many into poverty as a result. With over 100 million people forced to choose between adequate nutrition and payment of medical bills for vital healthcare, it would seem that the goal of universal access to healthcare maybe one lofty to achieve by its expiration date in 2030.

Recent data confirm the pursuit of universal health care access leaves more to be desired. Lack of access to affordable care is an issue that spans all nations, however, who are the most vulnerable populations, globally?

Results from the 2017 GMR that track universal healthcare coverage show that Sub Saharan Africa and South Asia have the lowest coverage of essential health services, compared to North America, Europe and East Asia. Within low-coverage regions, women and children are the most impacted. In fact, only 17% of women who live in countries that fall within in the poorest quintile have access to maternal and child healthcare services when compared with the 74% coverage rates received by their counterparts in the richest quintile. Further, in South Asia, as much as 72% of the population are forced into poverty as a result of a sudden, catastrophic health shock of a family member, while African countries have also seen a rapid incline in household spending on healthcare shocks. 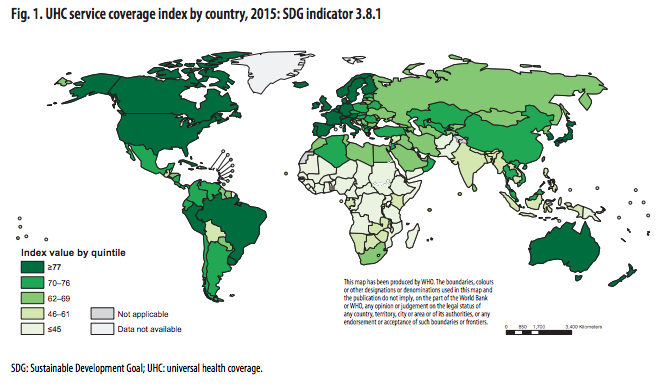 While some nations are more effected that others, it is important to note that no nation in the world has been able to fully mitigate its population against damaging heath shocks that push citizens and household below their relative poverty lines.

In addition to an immediate push below the poverty line, a lack of adequate and affordable healthcare coverage may have long-lasting impact on effected on households. Being in poor health may limit ones’ ability to attain a stable income in the time following the health care shock. Without adequate access to affordable care, loss of household income could be exacerbated by other household members, especially women, reducing their work hours to provide additional care to members who are in poor health.

Beyond the individual pains and income constraints of being without affordable care, large numbers of a national population being in poor health erodes human capital available in society, broadly.

Poor healthcare access is correlated with lower life expectancy, higher infant mortality, loses in productivity, inter and intra country inequalities and lower levels of development. As healthcare coverage is highly correlated with metrics that measure overall economic and social well-being, it is of vital importance that governments and other actors are committed to providing universal health care access that does not cause financial hardship.

Lack of access to healthcare is a systemic problem that demands macro-solutions to increase affordability. Policies that mitigate the financial impossibilities of household paying the full cost for healthcare, such as government supported insurance schemes, may be a worth while strategy to shield households from poverty caused by “out-of-pocket payments”. Further, on a national level, the WHO and World Bank recommend a restructuring of coverage so that “no one is left behind”. This means that those who are without insurance should be provided with additional support schemes to smooth any potential income shocks or lost income due to time spent out of the labour force.

While policy can play an instrument role in providing universal access to healthcare without financial hardship, increasing comparable, cross-country data should be a top priority.

Currently, measuring healthcare coverage across a variety of heterogenous national schemes with vastly differing health concerns remains a key barrier to devising robust strategies for universal access. For example, citizens in a particular nation may benefit from a public healthcare system supported by tax revenues, while others may rely on expensive, private healthcare plans. This introduces a dimension of inequality that is not captured by current data.

In terms of differing health concerns, it is difficult to compare effectivness of treatment across geographies with vastly differing concerns. For example, effective treatment of tropical diseases, such as malaria versus the reduction of hypertension in OECD countries are vastly different by nature. The development of common units that square treatment across health concerns that are worlds away from one another is a continual project that will require continued dedication amongst global health disciplines.

Further, data collection is currently done at the national level. With different budgets and ability to collect data, gaps in understanding result from potentially incomplete administration records, especially for those who are most vulnerable to health shocks.